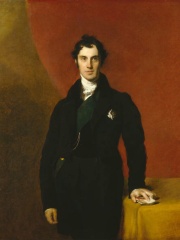 George Hamilton-Gordon, 4th Earl of Aberdeen (28 January 1784 – 14 December 1860), styled Lord Haddo from 1791 to 1801, was a British statesman, diplomat and Scottish landowner, successively a Tory, Conservative and Peelite politician and specialist in foreign affairs. He served as Prime Minister from 1852 until 1855 in a coalition between the Whigs and Peelites, with Radical and Irish support. The Aberdeen ministry was filled with powerful and talented politicians, whom Aberdeen was largely unable to control and direct. Read more on Wikipedia

Since 2007, the English Wikipedia page of George Hamilton-Gordon, 4th Earl of Aberdeen has received more than 283,850 page views. His biography is available in 48 different languages on Wikipedia (up from 44 in 2019). George Hamilton-Gordon, 4th Earl of Aberdeen is the 7,076th most popular politician (down from 6,890th in 2019), the 1,545th most popular biography from United Kingdom (down from 1,446th in 2019) and the 256th most popular British Politician.