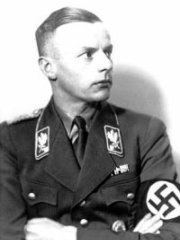 Friedrich-Wilhelm Krüger (8 May 1894 – 10 May 1945) was a German Nazi war criminal, acting as a paramilitary commander, while being high-ranking member of the SA and the SS. Between 1939 and 1943 he was the Higher SS and Police Leader in the General Government, giving him command of all police and security forces in German-occupied Poland. In this capacity, he organized and supervised numerous acts of crimes against humanity and had a major responsibility for the German genocide on the Polish nation, resulting in extermination of 6 millions of Poles (3 mln of them were Polish Jews) and massive destruction, deterioration and impoverishment of the Polish state. Read more on Wikipedia

Friedrich-Wilhelm Krüger was a German SS officer who served as the General Commissioner of the General Government in occupied Poland during World War II. He was responsible for the murder of tens of thousands of Polish Jews and Poles.

Among politicians, Friedrich-Wilhelm Krüger ranks 3,274 out of 15,710. Before him are Hamad bin Khalifa Al Thani, Abdelmadjid Tebboune, Christian Rakovsky, Eric II of Norway, Jean Moulin, and Ramiro II of Aragon. After him are Margaret of France, Duchess of Berry, Cylon of Athens, Herennius Etruscus, Hyeonjong of Goryeo, Thessalonike of Macedon, and Abu Musa al-Ash'ari.