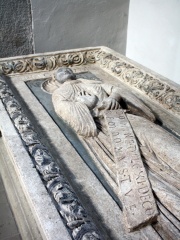 Plectrude (Latin: Plectrudis; German: Plektrud, Plechtrudis) (died 718) was the consort of Pepin of Herstal, the mayor of the palace and duke of the Franks, from about 670. She was the daughter of Hugobert, seneschal of Clovis IV, and Irmina of Oeren. Read more on Wikipedia

Plectrude was most famous for being the wife of Charlemagne.

Page views of Plectrudes by language

Among politicians, Plectrude ranks 3,949 out of 15,710. Before her are Emperor Kinmei, Atal Bihari Vajpayee, Menahem, Infanta Luisa Fernanda, Duchess of Montpensier, Otto Rasch, and Plutarco Elías Calles. After her are John III of Navarre, Maria Teresa of Savoy, Onjo of Baekje, Valerius Gratus, Emperor Ningzong, and Binali Yıldırım.