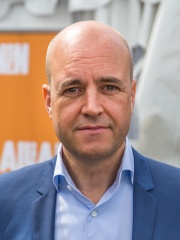 John Fredrik Reinfeldt (pronounced [ˈfrěːdrɪk ˈrâjnːfɛlt] (listen); born 4 August 1965) is a Swedish economist, lecturer and former politician who was Prime Minister of Sweden from 2006 to 2014 and chairman of the liberal conservative Moderate Party from 2003 to 2015. He was the last rotating President of the European Council in 2009. A native of Stockholm County, Reinfeldt joined the Moderate Youth League in 1983, and by 1992 had risen to the rank of chairman, a position he held until 1995. Read more on Wikipedia

Since 2007, the English Wikipedia page of Fredrik Reinfeldt has received more than 299,256 page views. His biography is available in 64 different languages on Wikipedia making him the 7,631st most popular politician.

Among politicians, Fredrik Reinfeldt ranks 7,588 out of 14,801. Before him are Commius, Prince Carl Bernadotte, Tutush I, Joanna, Duchess of Brabant, Alex Salmond, and Kujula Kadphises. After him are Jiro Taniguchi, Ninus, Abbas El Fassi, Manlia Scantilla, Malik-Shah II, and Simonetta Sommaruga.

Among people born in 1965, Fredrik Reinfeldt ranks 42. Before him are The Undertaker, Stefka Kostadinova, John C. Reilly, Connie Nielsen, Elizabeth Hurley, and Haddaway. After him are Linda Evangelista, Moby, Raí, Shania Twain, Aldair, and Jan-Ove Waldner.