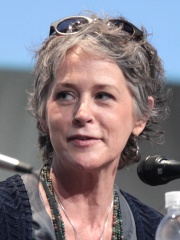 Melissa Suzanne McBride (born May 23, 1965) is an American actress and former casting director. McBride's breakout role was Carol Peletier on the AMC series The Walking Dead (2010–present). She has garnered critical acclaim and received multiple awards and nominations for her role on the show. Read more on Wikipedia

Among people born in 1965, Melissa McBride ranks 44. Before her are Princess Stéphanie of Monaco, Infanta Cristina of Spain, Moby, The Undertaker, Martin Lawrence, and Lennox Lewis. After her are Linda Evangelista, Raí, Jürgen Kohler, Elizabeth Hurley, Aldair, and Manuel Uribe.