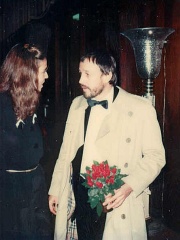 Frederic Fenimore Forrest Jr. (born December 23, 1936) is an American actor. Forrest came to public attention for his performance in When the Legends Die (1972), which earned him a nomination for the Golden Globe Award for Most Promising Newcomer. Read more on Wikipedia

Since 2007, the English Wikipedia page of Frederic Forrest has received more than 895,808 page views. His biography is available in 22 different languages on Wikipedia making him the 1,629th most popular actor.

Among actors, Frederic Forrest ranks 1,616 out of 8,832. Before him are Will Ferrell, Mila Kunis, Amanda Seyfried, Frank Finlay, Melissa Leo, and Alison Steadman. After him are Ed Asner, Henry Cavill, Jean Carmet, Eric Campbell, Xuxa, and Scatman Crothers.