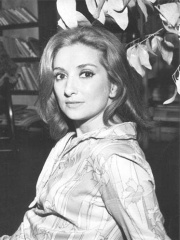 Norma Aleandro Robledo (born May 2, 1936) is an international award-winning Argentine actress, screenwriter, theatre director and author. She is considered as one of the more celebrated Argentine actresses and is recognized as a cultural icon.Aleandro starred in the Oscar-winning 1985 film The Official Story, a role that earned her the Cannes Award for best actress. She has performed in other successful films like The Truce (1974), Cousins (1989), Autumn Sun (1996), The Lighthouse (1998), Son of the Bride (2001) and Cama Adentro (2005). Read more on Wikipedia

Since 2007, the English Wikipedia page of Norma Aleandro has received more than 94,499 page views. Her biography is available in 32 different languages on Wikipedia making her the 1,591st most popular actor.

Among ACTORS In Argentina