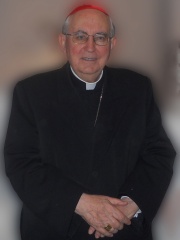 Agostino Vallini (born 17 April 1940) is an Italian prelate of the Catholic Church. He has been a cardinal since 2006. From 2008 to 2017 he served as Vicar General of Rome. Read more on Wikipedia

Among religious figures, Agostino Vallini ranks 1,296 out of 2,272. Before him are Bartholomeus Anglicus, Alexandre do Nascimento, Yijing, William Levada, Nathan Homer Knorr, and Jānis Pujats. After him are Daniele Comboni, Justo Gallego Martínez, Ad-Darazi, Severus of Antioch, John Smyth, and Pierre de Castelnau.