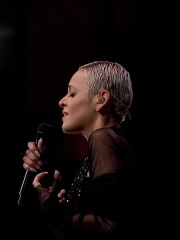 Marisa dos Reis Nunes ComIH (born 16 December 1973), known professionally as Mariza (Portuguese pronunciation: [mɐˈɾizɐ]), is a Portuguese fado singer.Mariza was born in Lourenço Marques, Portuguese Mozambique, to a Portuguese father, José Brandão Nunes, and a Mozambican mother, Isabel Nunes. When she was three years old, her family moved to Metropolitan Portugal, and she was raised in Lisbon's historic quarters of Mouraria and Alfama. While very young she began singing in a wide variety of musical styles, including gospel, soul and jazz. Read more on Wikipedia

Page views of Marizas by language

Among singers, Mariza ranks 1,015 out of 3,528. Before her are Martha Mödl, George London, Elīna Garanča, Pilar Lorengar, Nas, and Bobby Bland. After her are Shirley Verrett, Diana Damrau, Anita Traversi, Ofelya Hambardzumyan, Loretta Lynn, and Shaggy.

Among SINGERS In Mozambique

Among singers born in Mozambique, Mariza ranks 2. Before her are Afric Simone (1956). After her are António Calvário (1938).