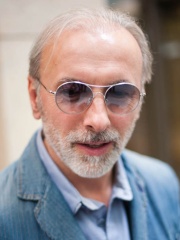 Edin Dervišhalidović (born 12 September 1962), known professionally as Dino Merlin, is a Bosnian singer-songwriter, musician, and record producer. Born in Sarajevo, he was the founder and leader of 'Merlin', which eventually became one of the best selling rock-bands of Southeast Europe.Nicknamed "The Wizard", he is considered one of the most prominent and commercially successful artists ever to emerge from former Yugoslavia.Dino is recognised for his later solo work during which he established himself as one of the best-selling regional artists of all time. During his career, he has produced over a dozen chart-topping albums, held several record-breaking tours, won many awards including the Sixth April Award of Sarajevo, and has authored the first national anthem of Bosnia and Herzegovina. Read more on Wikipedia

Among singers, Dino Merlin ranks 393 out of 3,541. Before him are Ghena Dimitrova, Mei Lanfang, Marian Gold, Adelina Patti, Marc Anthony, and Arsen Dedić. After him are Anggun, Natalia Oreiro, Janet Jackson, Sabah, Seal, and Googoosh.

Among SINGERS In Bosnia and Herzegovina