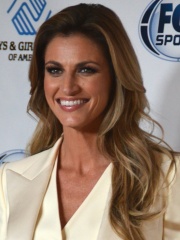 Erin Jill Andrews (born May 4, 1978) is an American sportscaster, television personality, and actress. She rose to prominence as a correspondent on the American cable sports channel ESPN after joining the network in 2004. She later joined Fox Sports in 2012 and has since become the lead sideline reporter for the network's NFL broadcasting team. Read more on Wikipedia

Among presenters, Erin Andrews ranks 107 out of 109. Before her are Adam Carolla, Karl Pilkington, Kayleigh McEnany, Keith Olbermann, Bindi Irwin, and Barkha Dutt. After her are Erin Burnett, Ana Kasparian, and Summer Sanders.