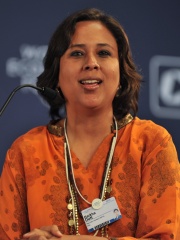 Barkha Dutt is an Indian television journalist, author and owner of YouTube news channel MoJo.She is an opinion columnist with The Hindustan Times and The Washington Post. Dutt was part of NDTV's team for 21 years, until she left the channel in January 2017. Barkha emerged as a prominent figure after her frontline war reporting on the Kargil Conflict between India and Pakistan in 1999. Read more on Wikipedia

Among presenters, Barkha Dutt ranks 106 out of 109. Before her are Erik Solbakken, Adam Carolla, Karl Pilkington, Kayleigh McEnany, Keith Olbermann, and Bindi Irwin. After her are Erin Andrews, Erin Burnett, Ana Kasparian, and Summer Sanders.

Among PRESENTERS In India

Among presenters born in India, Barkha Dutt ranks 2. Before her are Ramdev (1965).