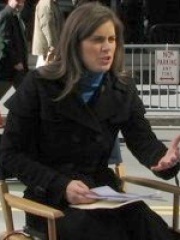 Erin Isabelle Burnett (born July 2, 1976) is an American news anchor, currently the anchor of Erin Burnett OutFront on CNN. She previously worked for CNBC as co-anchor of Squawk on the Street and the host of Street Signs. Burnett has also appeared on NBC's Meet the Press, Today, MSNBC's Morning Joe, and NBC Nightly News as well as making occasional appearances on The Celebrity Apprentice, serving as an advisor to Donald Trump.Burnett has hosted Erin Burnett OutFront live from the border of Mali, Afghanistan, Rwanda, the United Arab Emirates, and Israel. Read more on Wikipedia

Among presenters, Erin Burnett ranks 108 out of 109. Before her are Karl Pilkington, Kayleigh McEnany, Keith Olbermann, Bindi Irwin, Barkha Dutt, and Erin Andrews. After her are Ana Kasparian and Summer Sanders.