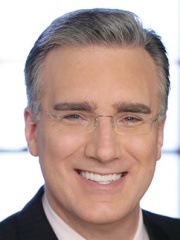 Keith Theodore Olbermann (; born January 27, 1959) is an American sports and political commentator and writer. Olbermann spent the first 20 years of his career in sports journalism. He was a sports correspondent for CNN and for local TV and radio stations in the 1980s, winning the Best Sportscaster award from the California Associated Press three times. Read more on Wikipedia

Since 2007, the English Wikipedia page of Keith Olbermann has received more than 2,590,891 page views. His biography is available in 16 different languages on Wikipedia making him the 93rd most popular presenter.

Among presenters, Keith Olbermann ranks 92 out of 94. Before him are Mike Rowe, Laura Ingraham, Erik Solbakken, Ann Curry, Bindi Irwin, and Adam Carolla. After him are Ana Kasparian.