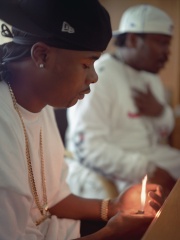 Malik Deshawn Cox (born June 23, 1978), known by his stage name Memphis Bleek, is an American rapper, songwriter, and record executive, who served as the hype man for fellow New York rapper Jay-Z. Cox started his own labels: Get Low Records in 1998, and Warehouse Music Group in 2016. He has released four albums (2 of which went Gold, 1 Went Platinum By The RIAA ). Read more on Wikipedia

Among singers, Memphis Bleek ranks 3,426 out of 3,541. Before him are James Fox, Trick Daddy, Ace Hood, SuRie, Gaia Cauchi, and Prakash Neupane. After him are Badshah, Lucie Jones, Park Ji-min, Lil Yachty, Ralf Mackenbach, and Yo Gotti.