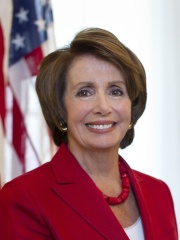 Nancy Patricia Pelosi (; née D'Alesandro; born March 26, 1940) is an American politician serving as Speaker of the United States House of Representatives since 2019, and previously from 2007 to 2011. Pelosi has served as a U.S. representative from California since 1987. A member of the Democratic Party, she is the only woman in U.S. history to serve as Speaker and, until the inauguration of Kamala Harris as vice president, was the highest-ranking female elected official in United States history. As House Speaker, Pelosi is second in the presidential line of succession, after the vice president.Pelosi was first elected to Congress in 1987, following her father, Thomas D'Alesandro Jr., who served as a U.S. Read more on Wikipedia

Nancy Pelosi is most famous for being the first female speaker of the House of Representatives.

Among politicians, Nancy Pelosi ranks 1,544 out of 15,710. Before her are Nicolás Maduro, An Lushan, Yolande de Polastron, Constantine VI, Felix Yusupov, and Möngke Khan. After her are Tiberius II Constantine, Æthelred the Unready, Henry II of Navarre, Emperor Ninkō, Ahmad Sanjar, and Josef Kramer.