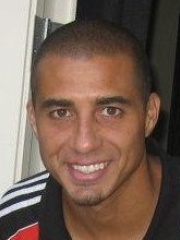 David Sergio Trezeguet (French pronunciation: ​[david sɛʁʒjo tʁezəɡɛ]; born 15 October 1977) is a French former footballer who played as a striker. Trezeguet began his career in Argentina with Club Atlético Platense at the age of eight, progressing through their youth system to their first team, where he made his debut in the Primera División in 1994. After one season, he transferred to Ligue 1 side AS Monaco, where he would form a striking partnership with international teammate Thierry Henry, winning the league in the 1996–97 season. Read more on Wikipedia

Since 2007, the English Wikipedia page of David Trezeguet has received more than 1,868,851 page views. His biography is available in 62 different languages on Wikipedia making him the 322nd most popular soccer player.