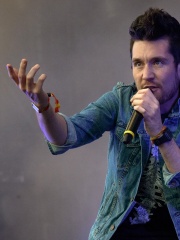 Daniel Campbell Smith (born 14 July 1986) is an English singer, songwriter and record producer. He is the lead singer, primary songwriter and founder of the British rock band Bastille. The band formed in 2010 and gained mass popularity in 2013 when the song "Pompeii" was released with their album Bad Blood. Read more on Wikipedia

Since 2007, the English Wikipedia page of Dan Smith has received more than 62,697 page views. His biography is available in 15 different languages on Wikipedia making him the 2,703rd most popular singer.

Among singers, Dan Smith ranks 2,718 out of 3,001. Before him are Amelle Berrabah, Omarion, David Banner, Luan Santana, Young Thug, and Jadakiss. After him are Anthony Hamilton, Astrid S, Airi Suzuki, Will Young, Lisa Hannigan, and Jessie Ware.