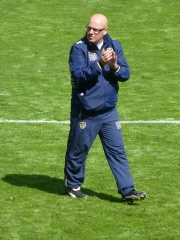 Brian James McDermott (born 8 April 1961) is a former professional footballer and former manager of Reading. Born in Slough to Irish parents, McDermott joined Arsenal as an apprentice in 1977 and went on to play for Fulham, IFK Norrköping, Oxford United, Huddersfield Town, Cardiff City, Exeter City and Yeovil Town in a 14-year playing career during the 1980s and 1990s. At IFK Norrköping he was named Sweden's Player of the Year in 1984. Read more on Wikipedia

Among people born in 1961, Brian McDermott ranks 632. Before him are Will Self, Kevin McDonald, Thurl Bailey, Judi Brown Clarke, Charlie Nicholas, and David Kaufman. After him are Daniel O'Donnell, Kevin Cramer, Benita Fitzgerald-Brown, Fatima Whitbread, Gary Mabbutt, and Anthony Cumia.