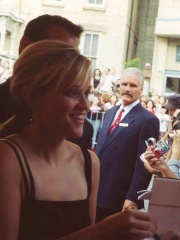 Laura Jeanne Reese Witherspoon (born March 22, 1976) is an American actress, producer, and entrepreneur. The recipient of several accolades, including an Academy Award and a Primetime Emmy Award, she is among the highest-paid actresses in the world, as of 2019. Read more on Wikipedia

Since 2007, the English Wikipedia page of Reese Witherspoon has received more than 19,458,558 page views. Her biography is available in 81 different languages on Wikipedia making her the 268th most popular actor.