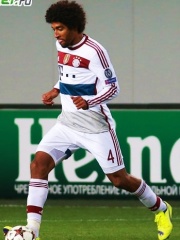 Dante Bonfim Costa Santos (born 18 October 1983), commonly known as Dante (Brazilian Portuguese: [ˈdɐ̃tʃi]), is a Brazilian professional footballer who plays for and captains French club Nice. Primarily a central defender, he has previously also been used as a defensive midfielder or a left back.After emerging at Juventude, Dante went on to play for Lille, Charleroi and Standard Liège, winning the Belgian Pro League with the latter. Read more on Wikipedia

Since 2007, the English Wikipedia page of Dante has received more than 528,876 page views. His biography is available in 49 different languages on Wikipedia making him the 1,524th most popular soccer player.

Page views of Dantes by language