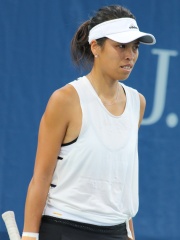 Hsieh Su-wei (Chinese: 謝淑薇; pinyin: Xiè Shúwéi (Taiwan);Taiwanese Mandarin: [ɕjê sǔ wěi]; born 4 January 1986) is a Taiwanese professional tennis player who represents Chinese Taipei in international competition, and is the current world No. 1 in doubles. Regarded as Taiwan's most successful tennis player of all time, and one of the greatest tennis players Asia has ever produced, Hsieh has won three singles and 28 doubles titles on the WTA Tour, one WTA 125K series doubles title, 27 singles and 23 doubles titles on the ITF Circuit, seven medals at the Asian Games (two gold, three silver, and two bronze), a gold and bronze medal at the 2005 Summer Universiade, and has amassed over $8.6 million in prize money. Read more on Wikipedia

Among TENNIS PLAYERS In Taiwan