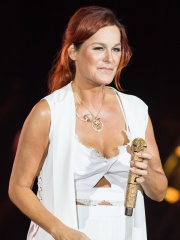 Andrea Ferber (née Zellen, born 28 January 1966), known professionally as Andrea Berg, is a German schlager singer. Born in Krefeld, she performed at carnivals as a child and began her career in 1992 after being discovered by record producer Eugen Römer. While she released her first studio album Du bist frei that same year, her commercial breakthrough took place with its follow-up Gefühle, released in 1995. Read more on Wikipedia

Among singers, Andrea Berg ranks 1,631 out of 3,541. Before her are Alesha Dixon, Rakim, Redfoo, Benjamin Biolay, Grimes, and Origa. After her are Siti Nurhaliza, Demet Akalın, Carly Rae Jepsen, Seo Kang-joon, Tony Cetinski, and Tajči.