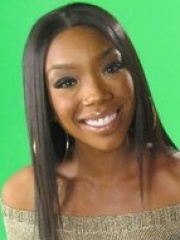 Brandy Rayana Norwood (born February 11, 1979), better known by her mononym Brandy, is an American singer, songwriter, actress and model. She is known for her distinctive sound, characterized by her peculiar timbre, voice-layering, and intricate riffs, which has earned her the title of "the Vocal Bible". As of August 2020, she has sold over 40 million records worldwide, with approximately 8.62 million albums sold in the United States alone. Read more on Wikipedia

Among singers, Brandy Norwood ranks 2,263 out of 3,541. Before her are Nicoleta Alexandru, Jenifer, Rita Guerra, Azad, Lee Hi, and JoJo. After her are K.Will, Shiri Maimon, Sıla, Gusttavo Lima, Debby Boone, and Kasia Kowalska.