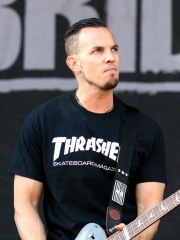 Mark Thomas Tremonti (born April 18, 1974) is an American musician best known for his tenures with Creed and Alter Bridge. He is a founding member of both bands, and has also collaborated with many other artists over the years. He formed his own band, Tremonti, in 2011, releasing the album All I Was in July 2012, followed by Cauterize in June 2015, Dust in April 2016 and A Dying Machine in June 2018. Read more on Wikipedia

Among singers, Mark Tremonti ranks 2,394 out of 3,541. Before him are Louane, Slick Rick, Paul Banks, Shy'm, Sizzla, and Basta. After him are Lúcia Moniz, Anna Semenovich, Zara, Émilie Simon, Kim Hyo-yeon, and Lauren Jauregui.