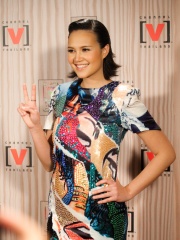 Amita Marie "Tata" Young (Thai: อมิตา มารี ยัง; born 14 December 1980) is a Thai singer, actress, model, and dancer of American descent who gained prominence in Thailand when she placed first in a national singing contest at age 11, subsequently signing a record deal and releasing her first album Amita Tata Young in 1996.Within five months, the album had sold over one million copies. Since then, Young has released eight studio albums, three in English and five in Thai. Read more on Wikipedia

Since 2007, the English Wikipedia page of Tata Young has received more than 339,733 page views. Her biography is available in 19 different languages on Wikipedia making her the 2,044th most popular singer.

Among singers, Tata Young ranks 2,054 out of 3,001. Before her are Miki Núñez, Frances Langford, Sho Sakurai, Misia, Kavita Krishnamurthy, and Fabri Fibra. After her are The D.O.C., Corey Hart, Jess Glynne, Lia, Ana Carolina, and Sana.

Among SINGERS In Thailand