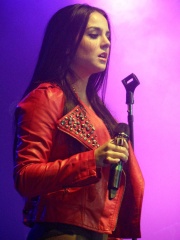 Joanna Noëlle Levesque (born December 20, 1990), known professionally as JoJo, is an American singer, songwriter, and actress. Raised in Foxborough, Massachusetts, she began performing in singing competitions and local talent shows from a young age. In 2003, record producer Vincent Herbert noticed her after she competed on the television show America's Most Talented Kids and asked her to audition for his record label Blackground Records. Read more on Wikipedia

Page views of JoJos by language

Among singers, JoJo ranks 2,263 out of 3,541. Before her are Ruth Jacott, Nicoleta Alexandru, Jenifer, Rita Guerra, Azad, and Lee Hi. After her are Brandy Norwood, K.Will, Shiri Maimon, Sıla, Gusttavo Lima, and Debby Boone.