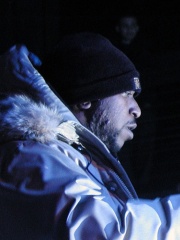 Nathaniel Thomas Wilson (born July 20, 1968), better known by his stage name Kool G Rap (or simply G Rap), is an American rapper from Queens. He began his career in the mid-1980s as one half of the group Kool G Rap & DJ Polo and as a member of the Juice Crew. He is often cited as one of the most influential and skilled MCs of all time, and a pioneer of mafioso rap/street/hardcore content and multisyllabic rhyming. Read more on Wikipedia

Since 2007, the English Wikipedia page of Kool G Rap has received more than 889,480 page views. His biography is available in 18 different languages on Wikipedia making him the 2,198th most popular singer.

Among singers, Kool G Rap ranks 2,208 out of 3,001. Before him are Charlotte Wessels, Anmary, Hannah Mancini, Karoline Krüger, Maria Rita, and Tony Yayo. After him are Luísa Sobral, Filipa Azevedo, Eunha, Anna Bergendahl, Emmy, and Gloria.