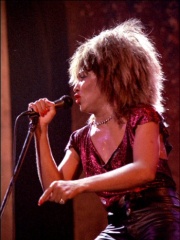 Tina Turner (born Anna Mae Bullock; November 26, 1939) is an American-born singer, songwriter, and actress, now a Swiss citizen. Known by the honorific nickname "Queen of Rock 'n' Roll", she rose to prominence as the frontwoman of Ike & Tina Turner before launching a successful career as a solo performer. Turner began her career with Ike Turner's Kings of Rhythm in 1957. Read more on Wikipedia

Tina Turner is most famous for her work as a singer, dancer, actress, and author. She has won eight Grammy Awards and sold more than 200 million records worldwide.

Openculture.com
Tina Turner Delivers a Blistering Live Performance of “Proud Mary” on Italian TV (1971)
John Fogerty once said that he conceived the opening bars of “Proud Mary” in imitation of Beethoven’s Fifth symphony. It’s an unusual association for a song about a steamboat, but it works as a classic blues rock hook. Most people would say, however, that the…
Josh Jones
TMZ
Tina Turner Fans Outraged She's Not in Rock & Roll HOF Solo
Tina Turner's new documentary on HBO has revved up fans who are incredulous she's not already in the Rock & Roll Hall of Fame as a solo artist ... but there's something they can do about it. Since "Tina" premiered in late March -- and even…
TMZ Staff
Daily Mail
Oprah Winfrey will pay tribute to the iconic Tina Turner at Clive Davis' second Grammy party
Clive Davis was forced to postpone his second Grammy party after being diagnosed with Bell's Palsy in February, but it should be worth the wait with Oprah Winfrey set to honor Tina Turner at the bash.
Brian Gallagher
Page Six
Oprah Winfrey will pay tribute to Tina Turner at Clive Davis’ party
It's unknown if Turner will make an appearance at the party.
Carlos Greer