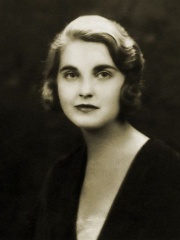 Barbara Woolworth Hutton (November 14, 1912 – May 11, 1979) was an American debutante, socialite, heiress, and philanthropist. She was dubbed the "Poor Little Rich Girl", first when she was given a lavish and expensive debutante ball in 1930, amid the Great Depression, and later due to a notoriously troubled private life.Heiress to one-third of the estate of the retail tycoon Frank Winfield Woolworth, Barbara Hutton was one of the wealthiest women in the world. She endured a childhood marked by the early loss of her mother at age four to suicide and the neglect of her father, setting the stage for a life of difficulty forming relationships. Read more on Wikipedia

Since 2007, the English Wikipedia page of Barbara Hutton has received more than 1,567,896 page views. Her biography is available in 16 different languages on Wikipedia making her the 45th most popular celebrity.