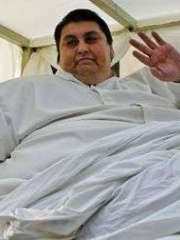 Manuel Uribe Garza (11 June 1965 – 26 May 2014) was a Mexican man who suffered from morbid obesity to one of the greatest extents known in recorded history. After reaching a peak weight of around 600 kg (1,300 lb) and having been unable to leave his bed since 2002, he lost approximately 230 kg (510 lb)—over one third of his body weight—with the help of doctors and nutritionists by February 2008. However, he died in his hometown on 26 May 2014 weighing 394 kg (869 lb).Uribe drew worldwide attention in January 2006, when he made an emotional plea on a Mexican television network that prompted both private and public assistance. Read more on Wikipedia

Since 2007, the English Wikipedia page of Manuel Uribe has received more than 628,901 page views. His biography is available in 26 different languages on Wikipedia making him the 54th most popular celebrity.

Among CELEBRITIES In Mexico

Among celebrities born in Mexico, Manuel Uribe ranks 1. After him are Ximena Navarrete (1988).