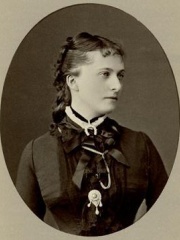 Princess Catherine Dolgorukova (Russian: Княгиня Екатери́на Миха́йловна Долгору́кова, tr. Yekaterína Mikháyilovna Dolgorúkova; 14 November [O.S. 2 November] 1847 – 15 February 1922) was a Russian aristocrat and the daughter of Prince Michael Dolgorukov and Vera Vishnevskaya. Catherine was a long-time mistress of Tsar Alexander II of Russia and later, as his morganatic wife, was given the title of Princess Yurievskaya (Светлейшая княгиня Юрьевская). Alexander and Catherine already had three children when they formed a morganatic marriage on 18 July [O.S. 6 July] 1880, after the death of the Emperor's wife, Marie of Hesse and by Rhine, on 3 June [O.S. Read more on Wikipedia

Among companions, Catherine Dolgorukov ranks 341 out of 687. Before her are Clodia Pulchra, Vipsania Agrippina, Richardis, Princess Milica of Montenegro, Princess Marie of Orléans, and Princess Amalie of Hesse-Darmstadt. After her are Martha Washington, Dulce of Aragon, Kaya Sultan, Marie of Hesse-Kassel, Elisabeth of Bavaria, Queen of Germany, and Maria of Aragon, Queen of Castile.

Among COMPANIONS In Ukraine