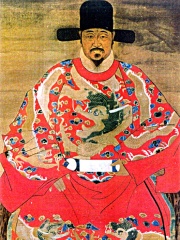 Qi Jiguang (Chinese: 戚繼光; pinyin: Qī Jìguāng; Wade–Giles: Ch'i1 Chi4-Kuang1, November 12, 1528 – January 17, 1588), courtesy name Yuanjing, art names Nantang and Mengzhu, posthumous name Wuyi, was a Chinese military general and writer of the Ming dynasty. He is best known for leading the defense on the coastal regions against wokou pirate activities in the 16th century, as well as for the reinforcement of the Great Wall of China. Qi is also known for writing the military manuals Jixiao Xinshu and Lianbing Shiji or Record of Military Training (練兵實紀), which he based on his experience as a martial educator and defensive planner in the Ming military forces. Read more on Wikipedia

Since 2007, the English Wikipedia page of Qi Jiguang has received more than 180,146 page views. His biography is available in 23 different languages on Wikipedia making him the 397th most popular military personnel.