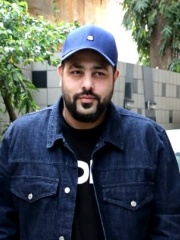 Aditya Prateek Singh Sisodia, (born 19 November 1985), known by his stage name Badshah, is an Indian rapper, singer, film producer and businessman known for his Hindi, Haryanvi, and Punjabi music. He started his career in 2006 alongside Yo Yo Honey Singh in his Hip Hop group Mafia Mundeer. He split from Honey in 2012 and released his independent Haryanvi song Kar Gayi Chull, which was later adopted into the 2016 Bollywood movie, Kapoor & Sons. Read more on Wikipedia

Page views of Badshahs by language

Among singers, Badshah ranks 3,898 out of 3,528. Before him are Aleksander Walmann, Mika Singh, Daz Sampson, Amber Bondin, Lucie Jones, and Jon Bellion. After him are Bazzi, Aksel Kankaanranta, Nikki Yanofsky, Kanon Suzuki, Luke Combs, and Silentó.