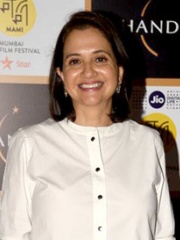 Anupama Chopra (née Chandra) is an Indian author, journalist, film critic and director of the MAMI Mumbai Film Festival. She is also the founder and editor of the digital platform Film Companion, which offers a curated look at cinema. She has written several books on Indian cinema and has been a film critic for NDTV, India Today, as well as the Hindustan Times. Read more on Wikipedia

Among writers, Anupama Chopra ranks 6,511 out of 5,755. Before her are Delia Grigore, Jessica Watson, Chase Elliott, Lyra McKee, NoViolet Bulawayo, and Abby Stein. After her are Téa Obreht, Emily Temple-Wood, Michael Buckley, and Meena Kandasamy.

Among people born in 1967, Anupama Chopra ranks 792. Before her are Phil Keoghan, Michael Carruth, Gary Kirsten, Peter Kelamis, Ruthie Bolton, and Jim Murphy. After her are Artur Davis and Jason Chaffetz.