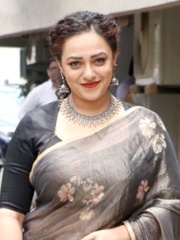 Nithya Menen (born Nithya Menon) (born 8 April 1988) is an Indian actress and singer, who appears in Malayalam, Tamil, Kannada, Telugu and Hindi films. She is recipient of three Filmfare Awards for the Telugu films Gunde Jaari Gallanthayyinde, Malli Malli Idi Rani Roju and the Tamil film Mersal. After making her acting debut as a child artist in the 1998 English film The Monkey Who Knew Too Much, Menen started her acting career by playing a supporting role in the Kannada film 7 O' Clock, which released in 2006. Read more on Wikipedia

Since 2007, the English Wikipedia page of Nithya Menen has received more than 4,966,493 page views. Her biography is available in 18 different languages on Wikipedia making her the 8,777th most popular actor.