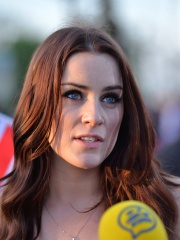 Lucie Bethan Jones (born 20 March 1991) is a Welsh singer, actress, and model. Jones first came to prominence while competing on series 6 of The X Factor UK in 2009, where she finished eighth. Read more on Wikipedia

Since 2007, the English Wikipedia page of Lucie Jones has received more than 556,652 page views. Her biography is available in 27 different languages on Wikipedia making her the 2,963rd most popular singer.