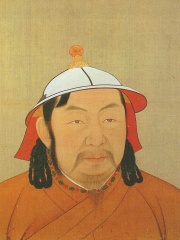 Buyantu Khan (Mongolian: Буянт хаан), born Ayurbarwada, also known by the temple name Renzong (Emperor Renzong of Yuan (Chinese: 元仁宗, April 9, 1285 – March 1, 1320), was the fourth emperor of the Yuan dynasty. Apart from Emperor of China, he is regarded as the eighth Great Khan of the Mongol Empire or Mongols, although it was only nominal due to the division of the empire. His name means "blessed/good Khan" in the Mongolian language. Read more on Wikipedia

Since 2007, the English Wikipedia page of Ayurbarwada Buyantu Khan has received more than 245,400 page views. His biography is available in 27 different languages on Wikipedia making him the 4,553rd most popular politician.

Among politicians, Ayurbarwada Buyantu Khan ranks 4,529 out of 14,801. Before him are Al-Ashraf Qansuh al-Ghuri, King Mu of Zhou, Orestes of Macedon, František Palacký, Emperor Monmu, and Baldwin II, Margrave of Flanders. After him are Pierre Mauroy, Tassilo III, Duke of Bavaria, Mohammad Najibullah, Henry the Bearded, Ablai Khan, and Dayan Khan.

Among people born in 1285, Ayurbarwada Buyantu Khan ranks 3. Before him are William of Ockham and Ferdinand IV of Castile. After him are Emperor Go-Nijō, An-Nasir Muhammad, Ferrer Bassa, Baldwin of Luxembourg, Michael of Trebizond, Euphemia of Pomerania, Thomas I Komnenos Doukas, and Al-Mustakfi I. Among people deceased in 1320, Ayurbarwada Buyantu Khan ranks 2. Before him is Michael IX Palaiologos. After him are Mayta Cápac and Henry II, Margrave of Brandenburg-Stendal.