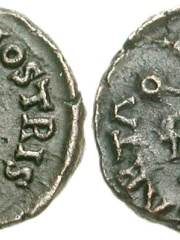 Bonifatius (or Bonifacius; also known as Count Boniface; died 432) was a Roman general and governor of the diocese of Africa. He campaigned against the Visigoths in Gaul and the Vandals in north Africa. An ally of Galla Placidia, mother and advisor of Valentinian III, Bonifacius engaged in Roman civil wars on her behalf against the generals Felix in 427-429 and Aetius in 432. Read more on Wikipedia

Since 2007, the English Wikipedia page of Bonifacius has received more than 98,007 page views. His biography is available in 20 different languages on Wikipedia (up from 19 in 2019). Bonifacius is the 851st most popular military personnel (down from 835th in 2019).

Page views of Bonifaciuses by language