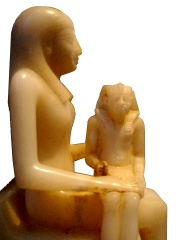 Pepi II Neferkare was most famous for being the last pharaoh of the 6th dynasty. He was the son of Pepi I and Queen Ankhesenpepi II. He ruled Egypt from c. 2278-2184 BCE.

Among politicians, Pepi II Neferkare ranks 894 out of 15,710. Before him are Luiz Inácio Lula da Silva, William III of the Netherlands, Julius Streicher, Nizam al-Mulk, Arthur Henderson, and Antiochus IV Epiphanes. After him are Michael I Rangabe, Charles XI of Sweden, Simeon I of Bulgaria, Lev Kamenev, Mahathir Mohamad, and Michel Temer.