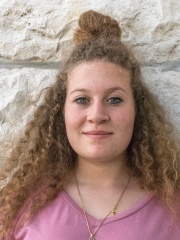 Ahed Tamimi (Arabic: عهد التميمي, romanized: ‘Ahad at-Tamīmī, also romanized Ahd; born 31 January 2001) is a Palestinian activist from the village of Nabi Salih in the occupied West Bank in the Palestinian territories. She is best known for appearances in images and videos in which she confronts Israeli soldiers. Tamimi's advocates consider her a freedom fighter for Palestine, comparing her to Malala Yousafzai; her detractors argue she is manipulated by political parents and has been taught to engage with violence.In December 2017, she was detained by Israeli authorities for slapping a soldier. Read more on Wikipedia