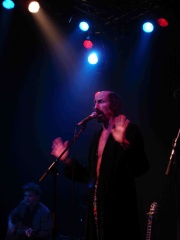 Arthur Wilton Brown (born 24 June 1942) is an English singer-songwriter best known for his flamboyant and theatrical performances, eclectic (and sometimes experimental) work and his powerful, wide-ranging operatic voice, in particular his high pitched banshee screams. He was also notable for his unique stage persona such as extreme facepaint and burning helmet. Brown has been lead singer of various groups, most notably the Crazy World of Arthur Brown and Kingdom Come, followed by a varied solo career as well as associations with Hawkwind, the Who and Klaus Schulze. In the late 1960s, the Crazy World of Arthur Brown's popularity was such that the group shared bills with the Who, Jimi Hendrix, the Mothers of Invention, the Doors, the Small Faces, and Joe Cocker, among others.He is best known for The Crazy World of Arthur Brown's 1968 single "Fire", reaching number one in the UK Singles Chart and Canada, and number two on the US Billboard Hot 100 as well as its parent album The Crazy World of Arthur Brown which reached number 2 in the UK and number 7 in the US. Read more on Wikipedia

Among singers, Arthur Brown ranks 944 out of 3,541. Before him are Little Walter, Lenny Kuhr, Chava Alberstein, Linda Martin, Peaches, and Diana Damrau. After him are Xzibit, Bunny Wailer, Clare Torry, Alain Bashung, Lizzo, and Beth Hart.