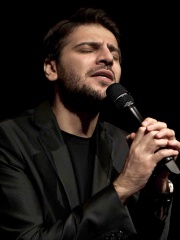 Sami Yusuf (born 21 July 1980) is an Iranian-born British Muslim singer, songwriter, multi-instrumentalist, composer, record producer, and humanitarian of Azerbaijani descent. Yusuf gained international attention with the release of his debut album, Al-Mu`allim, in 2003. Now with over 34 million albums sold, he performs at venues around the world. Read more on Wikipedia

Among singers, Sami Yusuf ranks 810 out of 3,541. Before him are Naná Vasconcelos, Laurel Aitken, Travis Scott, Camillo Felgen, Ingvar Wixell, and Vanilla Ice. After him are Riccardo Fogli, Dr. John, Gregg Allman, Michael Bublé, The Weeknd, and Phil Anselmo.

Among SINGERS In Iran