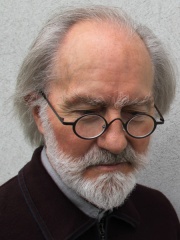 Roy Harper (born 12 June 1941) is an English folk rock singer, songwriter and guitarist. He has released 32 albums (including 10 live albums) across his 50-year career. As a musician, Harper is known for his distinctive fingerstyle playing and lengthy, lyrical, complex compositions, reflecting his love of jazz and the poet John Keats.His influence has been acknowledged by Jimmy Page, Robert Plant, Pete Townshend, Kate Bush, Pink Floyd, and Ian Anderson of Jethro Tull, who said Harper was his "...primary influence as an acoustic guitarist and songwriter." Neil McCormick of The Daily Telegraph described him as "one of Britain's most complex and eloquent lyricists and genuinely original songwriters... Read more on Wikipedia

Since 2007, the English Wikipedia page of Roy Harper has received more than 384,916 page views. His biography is available in 23 different languages on Wikipedia making him the 955th most popular musician.