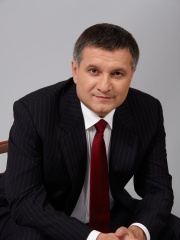 Arsen Borysovych Avakov (Ukrainian: Арсен Борисович Аваков; born January 2, 1964) is a Ukrainian politician and businessman. Since 2014, he has served as Ukraine's Minister of Internal Affairs, first being appointed in the first cabinet of Prime Minister Arseniy Yatsenyuk. He was reappointed to the same position by every successive government since then, most recently in March 2020 in the Shmyhal Government led by Prime Minister Denys Shmyhal. Read more on Wikipedia

Among politicians, Arsen Avakov ranks 12,989 out of 15,710. Before him are Nicolas Hulot, Gabriel París Gordillo, Georg Friedrich, Prince of Prussia, Erskine Hamilton Childers, Glappa of Bernicia, and Alexandru G. Golescu. After him are Florence Harding, Heinrich Mark, George Fernandes, Pak Ui-chun, Patrick Leahy, and Princess Alexia of Greece and Denmark.