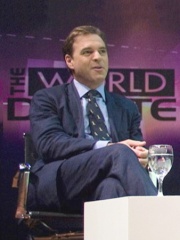 Niall Campbell Ferguson (; born 18 April 1964) is a Scottish historian based in the United States who is the Milbank Family Senior Fellow at the Hoover Institution at Stanford University and a Senior Faculty Fellow at the Belfer Center for Science and International Affairs at Harvard University. Previously, he was a professor at Harvard, the London School of Economics and New York University, a visiting professor at the UK New College of the Humanities, and a senior research fellow at Jesus College, Oxford, England. Ferguson writes and lectures on international history, economic and financial history and British and American imperialism. Read more on Wikipedia