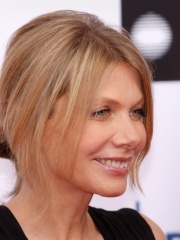 Ursula Karven, previously Ursula Karven-Veres (born Ursula Ganzenmüller 17 September 1964 in Ulm) is a German actress, writer, model and yoga instructor. Karven has acted in numerous German television films and series. On June 16, 2001, Karven made international headlines when her four-year-old son, Daniel, drowned at a birthday party in the swimming pool of American musician Tommy Lee in Santa Monica.She was married to James Veres and has two other children.Karven began practicing yoga when she was 30, and has published several books and DVDs promoting and demonstrating yoga-based exercises. Read more on Wikipedia

Since 2007, the English Wikipedia page of Ursula Karven has received more than 130,523 page views. Her biography is available in 28 different languages on Wikipedia making her the 4,200th most popular actor.