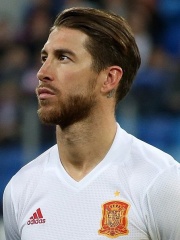 Sergio Ramos García (Spanish pronunciation: [ˈseɾxjo ˈramos ɣaɾˈθi.a]; born 30 March 1986) is a Spanish professional footballer who plays as a centre-back for Ligue 1 club Paris Saint-Germain and the Spain national team. Known for his aggressive play, ball retrieval ability and prolific goalscoring abilities, he is widely regarded as one of the greatest defenders of all time, having formerly played for Real Madrid for sixteen seasons, winning four UEFA Champions League titles with the Spanish giants along with two UEFA European Championship titles and the 2010 FIFA World Cup with the national team.After emerging through Sevilla's youth academy and spending two seasons with the senior side, Ramos moved to Real Madrid in the summer of 2005. Since then, he went on to become a mainstay for Real Madrid, and had won 22 major honours, including five La Liga titles and four UEFA Champions League titles, becoming one of La Liga's top goalscorers from a defensive position. Read more on Wikipedia

Sergio Ramos is most famous for being a Spanish professional footballer who plays for Real Madrid and the Spain national team. He is considered to be one of the best defenders in the world, and has been named UEFA Club Defender of the Year five times.