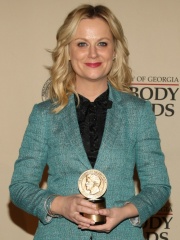 Amy Meredith Poehler (; born September 16, 1971) is an American actress, comedian, writer, producer, and director. After studying improv at Chicago's Second City and ImprovOlympic in the early 1990s, she co-founded the improvisational-comedy troupe Upright Citizens Brigade. The group moved to New York City in 1996 where their act became a half-hour sketch comedy series on Comedy Central in 1998. Read more on Wikipedia

Since 2007, the English Wikipedia page of Amy Poehler has received more than 13,361,603 page views. Her biography is available in 54 different languages on Wikipedia making her the 4,852nd most popular comedian.

Among comedians, Amy Poehler ranks 53 out of 8. Before her are Andy Samberg, Eddie Izzard, Jamie Kennedy, Tracey Ullman, David Cross, and Patton Oswalt. After her are Jordan Peele, Amy Sedaris, Bill Hicks, Amy Schumer, Cedric the Entertainer, and Jemaine Clement.