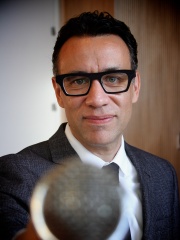 Fereydun Robert Armisen (born December 4, 1966) is an American actor, comedian, writer, producer, and musician. He is best known as a cast member on Saturday Night Live from 2002 to 2013. With his comedy partner Carrie Brownstein, Armisen was the co-creator and co-star of the IFC sketch comedy series Portlandia. Read more on Wikipedia

Among comedians, Fred Armisen ranks 59 out of 90. Before him are Bill Hicks, Amy Poehler, David Cross, Cedric the Entertainer, Stephen Merchant, and Amy Sedaris. After him are Jeff Dunham, Dave Chappelle, Janeane Garofalo, Jemaine Clement, Nick Offerman, and Dax Shepard.